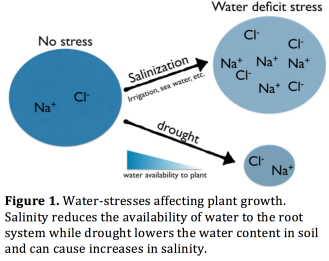 Overview: One of our greatest challenges in the next 50 years will be to realize a global society that is fully sustainable. Water is the most limiting resource for plant growth while agriculture uses between 70-80% of the fresh water supply. Despite its critical importance, key questions remain regarding how plants sense, transport and efficiently use water (Robbins and Dinneny, 2015). My research aims to understand plant-environment interactions using a holistic approach that emphasizes the importance of developmental pathways and molecular genetic mechanisms in guiding acclimation and homeostatic processes (Feng et al., 2016; Dinneny, 2015a).  This work has led to the exploration of water-stress responses in plants at unparalleled spatial and temporal resolution (Duan et al., 2013; Geng et al., 2013; Dinneny et al., 2008), the discovery of novel adaptive mechanisms used by roots to capture water (Sebastian et al., 2016; Bao et al., 2014) and the invention of imaging methods that enable multidimensional studies of plant acclimation (Rellán-Álvarez et al., 2015). Today’s research goals focus on understanding the signaling mechanisms plants use to sense water availability and the characterization of the molecular-genetic basis for naturally occurring adaptive innovations that allow plants to survive water-limiting environments.

Understanding plant-water interactions at the micro-scale

A key step to understanding how cells perceive changes in water availability will be to determine the osmosensory signal transduction pathways (Figure 1)(Robbins and Dinneny, 2015). Changes in the concentration of solutes in the immediate outside environment affect the osmotic pressure experienced by the cell. Salinity and other solutes reduce the osmotic potential of the environment that roots grow in and limit the flow of water from the soil to the root (Dinneny, 2015b). My group has characterized the salinity response through cell-type specific approaches and we established the first-of-its-kind spatiotemporal transcriptome map of an environmental response in roots (Figure2)(Dinneny et al., 2008; Geng et al., 2013; Dinneny, 2010, 2015b). These studies have used systems biology approaches to determine the role diverse hormone signaling pathways play in coordinating discrete phases of the salt response and have defined the exact cell layers where abscisic acid (ABA) acts to regulate growth during stress (Duan et al., 2013; Dinneny, 2014; Robbins et al., 2014).

Synthetic biology approaches provide an intellectual context for understanding biological processes using engineering principles. Our spatiotemporal transcriptional map has provided a unique opportunity to uncover the role of promoter DNA sequence in controlling cell-type and environment-specific gene regulation. In an NSF funded project in collaboration with Steve Kay (Scripps Institute) and José Pruneda-Paz (University of California, San Diego) where I am lead-PI, we have used synthetic promoters to understand the role of cis-regulatory elements (CREs) in tissue-specific stress responses. Using reporter-based assays and confocal imaging, we are surveying the transcriptional activities of isolated CREs during normal root growth and salt responses. Functionally validated CREs were then characterized using high-throughput Yeast-1-Hybrid (Y1H) methods to identify the transcription factors that bind these sequences. Our work has identified novel functions for 4 known CREs and 12 previously uncharacterized regulatory sequences (Wu et al., in revision). These data provide the first functionally validated CRE “parts list” in plants and may allow us to determine the combinatorial logic by which these sequences act, the design principles for engineering new transcriptional functionality into a promoter and the foundation for understanding how regulatory sequences evolve during adaptation to high-saline environments.

The nature of the upstream signal transduction pathways that allow the cell to perceive differences in osmotic potential are unknown but likely involve perception of physical forces exerted on the cell by osmotic imbalance (Robbins and Dinneny, 2015). Using the flowering plant model Arabidopsis, we are characterizing a receptor-like kinase that is necessary for acclimation to the ionic component of salt stress. Previous work on this gene has suggested a role for mechanosensing and we believe that such processes may be key for allowing cells to monitor the biophysical properties of the wall during growth. Mutants in this receptor fail to properly regulate cell expansion upon recovery, ultimately leading to cells that dramatically explode. We have uncovered exciting new modes by which changes in cytosolic calcium affect the acceleration of growth during recovery and are currently working to understand how sodium ions may affect cell-wall integrity and these downstream calcium oscillations (Feng et al. in preparation).

Single cell models such as yeast have aided the identification of core osmo-sensory pathways in non-plant cells (Hohmann et al., 2007). To facilitate defining such pathways in plants, we are collaborating with Martin Jonikas at Carnegie to utilize high-throughput genetic screening methods in the alga, Chlamydomonas (Zhang et al., 2014). We have recently found that mutants in putative osmosensory pathways in Arabidopsis are necessary for survival of Chlamydamonas after hyperosmotic shock indicating conservation across the plant lineage (Vilarrasa-Blasi et al., in preparation). Initial genome-scale mutant screens have identified hundreds of loci that are necessary for growth under hyperosmotic conditions including putative signal transduction components not previously associated with the osmotic stress response. Transcriptomic and proteomic profiling of Chlamydomonas under these conditions will enable a systems level understanding of osmoregulation without the complications of a multicellular context.

On land, water is heterogeneously distributed; however our understanding of how the location of water is sensed and ultimately affects developmental decisions is poor (Robbins and Dinneny, 2015). We have recently discovered that roots are able to developmentally respond to differences in water availability at spatial scales not previously considered (Bao et al., 2014). Unilateral contact of a root with a wet surface induces development of lateral roots along the contacted side in a phenomenon we term hydropatterning (Figure 3). Hydropatterning of root development provides a robust visual assay to understand how plants sense and respond to the spatial distribution of resources in their local environment, and provides a model to explore how spatial cues are transmitted across tissue layers to pattern development. In Arabidopsis, we have identified components of the auxin hormone biosynthesis and transport pathways as essential mediators of the hydropatterning response (Bao et al., 2014).

We have used the maize root as our primary model system here due to its size and agricultural relevance and have designed simple yet powerful physiological experimental techniques that allow us to test the local and systemic effects of changes in water availability on root patterning (Bao et al., 2014). We have defined the exact developmental zone of competence where moisture induces lateral root development in this system, and the minimum time of exposure to such stimuli needed for induction. We have recently performed RNAseq expression analysis of maize roots where root tips were micro-dissected into contact-side and air-side halves and profiled. These data identify molecular candidates that are targets of moisture signaling that may provide clues for how moisture locally regulates the auxin-signaling pathway to affect lateral root development. The ease of observing hydropatterning in maize roots has also made it a useful system for identification of phenotypic variants. We are currently cloning a major effect QTL (quantitative trait locus) that disrupts hydropatterning and have narrowed it to a ~25-gene interval. Together with Jonathan Lynch at Penn State University, we are testing the field relevance of such variation in affecting the architecture of root systems and the water-use efficiency of the whole plant.

We have determined that the competence to sense variation in water availability and respond by hydropatterning spatially correlates with locations of active growth in the root. Our current hypothesis is that growing cells may be adept at measuring the availability of water since the rate at which they grow is dependent on the ease with which water can be taken up from their immediate environment. We have established a mathematical model for roots that incorporates known physiological parameters and have shown how growth and tissue hydraulic conductivity determine the magnitude of water potential gradients established in the root. Experimental manipulation of growth disrupts hydropatterning thus strengthening our hypothesis that the interpretation of water availability in the environment requires water-uptake dependent processes (Robbins et al., in preparation). This provides a new paradigm for how gradients of biological information are generated in a tissue distinct from the classical reaction-diffusion model.

Towards a whole-plant understanding of water responses

In the lab we often simplify the environmental conditions we grow our organisms under to reduce variation and increase the power of our visualization techniques. To study roots, plants are often grown in sterile gel-based media that exposes the whole plant, and root system, to light (Duan et al., 2015). It is worth considering, however, that the native lives of these organisms might be quite different (Dinneny, 2015a). Soil is a complex matrix of particles of different sizes and chemistries, pockets of air, heterogeneous distributions of water and nutrients and a micro-cosmos of bacteria, fungi and animals rivaling the biodiversity found in any rainforest canopy (Brady and Weil, 2008). I think it is useful to envision the types of biology that might exist in soil and to figure out ways of investigating these aspects using thoughtfully designed experimental approaches. 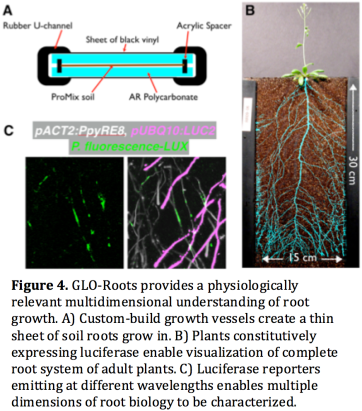 We have recently developed an integrated system termed GLO-Roots (Growth and Luminescence Observatory for Roots, U.S. patent application 13/970,960), which is composed of custom growth vessels, reporter genes, imaging systems and image analysis software that allows root architecture, gene expression and microbial associations to be studied in soil grown plants (Figure4)(Rellán-Álvarez et al., 2015). Luminescence-based reporters enable high-contrast visualization of roots and avoid the high-energy illumination required in fluorescence-based imaging. We have used GLO-Roots to reveal potentially adaptive responses of root systems to simulated drought treatments, which are difficult to study using gel-based media. These experiments have shown that, in Arabidopsis, lateral roots redirect growth downwards towards water hidden deeper in the soil column. Image analysis software allows us to track the individual growth trajectories of root tips and measure the relative moisture of the local soil environment. Based on this work we predict that local sensing of the environment is likely important for enhancing gravity responses of individual root tips.

We are currently introducing our luminescence-based reporters into a large panel of Arabidopsis accessions to survey the diversity of root forms and environmental responses within this species. The wide geographic distribution of these accessions and available genome sequence provided by the 1001 genomes project will allow us to identify SNP variation responsible for phenotypic differences and identify loci potentially important for local adaptation (Weigel and Mott, 2009). An automated plant handling system is currently being designed in collaboration with Modular Systems that will allow us to image 50-100 plants per day and enable the large-scale characterization of root systems needed to understand the diversity of responses that exist.

The GLO-Roots approach has been applied to other non-Arabidopsis models such as tomato and grass species Brachypodium distachyon and Setaria viridis. We have used Setaria as a key model for understanding how the shoot-derived root system of grasses is affected by water deficit. We have discovered that the shoot crown, which rests at the soil surface, is able to locally sense the availability of water and regulate the initiation of new crown roots based on this signaling. Wild species such as Setaria viridis and Teosinte show highly restrictive development of crown roots while domesticated species S. italica and Zea mays show reduced responsivity and are able to form crown roots under water deficit. We have shown that development of crown roots under drought incurs a penalty under drought, which suggests that breeding for greater sensitivity to water deficit in the crown may benefit crops grown in arid regions (Sebastian et al., 2016).

Integration of these macro-scale approaches with our tissue-specific and cellular resolution tools will allow us to provide a multi-scale understanding of water-associated plant biology and ultimately provide clarity for how this essential resource shapes the physiology and evolution of plants (Feng et al., 2016).

Dinneny, J.R. (2015a). A developmental biologist’s journey to rediscover the Zen of plant physiology. F1000Research 4.

Robbins, N.E. and Dinneny, J.R. (2015). The divining root: moisture-driven responses of roots at the micro- and macro-scale. J. Exp. Bot.